Gripclad provide  Anti Slip Flat sheets for Nant y Bedd see what they had to say below.

We needed to get matters sorted out for the coming season, and one of the things on the (long) list was finding a way to make the bridges safer, particularly after a drop of rain – not that we’ve had much of that recently as my hydro returns clearly show.

When wet, all the bridges become a bit like skating rinks – or ski jumps in the case of the rope one – as algae forms a sort of slimy but invisible surface on the timbers.  The only recourse to a safer crossing is regular scrubbing with detergent (Ecover, of course, so that the stream doesn’t get polluted by normal detergents!).  It’s hard work and time consuming and doesn’t last very long.

We thought about covering them with chicken wire, which you often see on stiles and bridges in the countryside, but rejected that idea as being potentially as hazardous as the algae in the longer term.

A lot of Google searching came up with a company that supplies, among others, the Brecon Beacons National Park. So what works for them must work for us.

A long exchange of e-mails later with the long-suffering Barry – trying to work out the best balance of cost and safety – led to four big packages arriving a week or so ago.  This meant a long day of scrubbing before a further day or so of screwing!

Beforehand the treads on the bridges looked a bit like this.

Who are this wonderful company?  They are called Gripclad (www.gripclad.co.uk) and Barry was as helpful as anyone could possibly be.  Not a cheap option, but the saving in time and effort, plus the peace of mind that visitors will be safe makes it worthwhile. Hopefully it will be a scorching hot summer and they won’t be needed, but we all know what Welsh weather can be like..

Need to find out more about GRP Flat Sheets and Panels 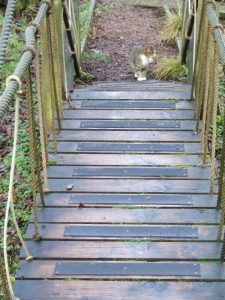